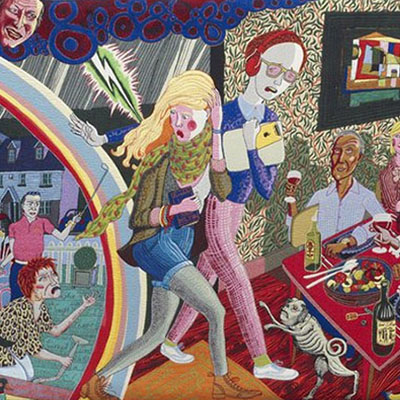 Until recently, I regarded Grayson Perry as a sartorially challenged transvestite who produced quite nice pots. After having watched Channel 4’s All in the best possible taste in which he examines how taste is informed by class, I”ve changed my mind.
Grayson Perry spent quite some time interviewing and studying people of different classes, and from his insights designed 3 pairs of panoramic tapestries. These were inspired by Hogarth’s A Rake’s Progress, which not only depicted the rise and fall of Tom Rakewell but also captured the mood of the day. Class, taste and social mobility are just as relevant today as they were in 1733. Each wall-hanging is also based on a religious painting.
Some artists believe that you shouldn’t have to explain your art, but I disagree. Perry’s programme commentary is very relaxed, almost as if he is thinking aloud, and illustrates details of the tapestries that you might overlook. He is very perceptive, but not patronising, fitting in just as easily with the hairdressers of Sunderland as he does with the landed gentry. Some of the questions posed were: Why do people recoil from working-class taste? Where does glamour stop and tacky start? Are taste decisions a bonding ritual?
Be prepared to be bowled over but feel slightly uncomfortable by the artworks. I caught myself smirking at the big hair, fake tan, high heels and implants of one of his women, but that says more about me than the subject. I also found myself cringing at the William Morris wallpaper, the understated clothes, the wine and the cupcakes, as these were all too familiar images from friends’ lives.
The exhibition is currently running at the Victoria Miro Gallery in North London.