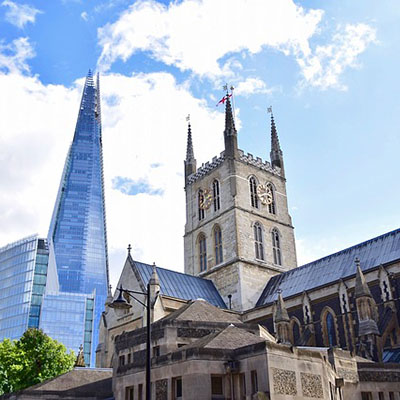 You may be thinking ‘I’ve done this walk’, but have you ever done it the ‘back way’? Neither had I until recently, and I discovered a couple of gems.
Start at Waterloo, but instead of walking along the embankment, turn south down Waterloo Road until you get to the Old Vic, then turn left down The Cut. Opposite the Old Vic is the tiny Llewelyn Alexander Gallery as there is always interesting work on display. Carry on down The Cut (making a note of all the eateries for future reference – Meson Don Felipe and Tas are particularly good)) and have a look at the posters just outside Southwark Station. This is the scene I saw last month, but London Transport art is always changing, so who knows what you might see.

Quicken your pace down Union Street until you get to Jerwood Space on your right. This is a beautifully refurbished Victorian school which houses mostly rehearsal space for theatre and dance companies, but also has a very nice exhibition space, glazed courtyard and cafe which are open to the public. Follow this link to see what’s showing at the moment: 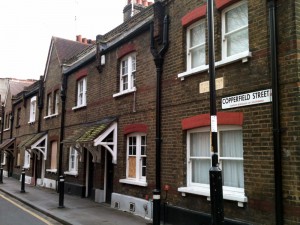 Continue down Union Street and take the next right (Pepper Street) to the corner of Copperfield Street. Here you’ll find a lovely old churchyard (All Hallows, maintained by the locals) and some charming little houses (known as Winchester Buildings, as part of Southwark used to be owned by the Archbishop of Winchester). The area used to be full of brothels (their prostitutes known as Winchester Geese), the profits of which used to go to His Grace.
At the end of the road, turn left onto Southwark Bridge Road, then right into Union Street again. This will lead you to the wonderful Borough Market. For those of you who haven’t been here before make sure you’ve been to the cashpoint! Wonderful food shops and stalls abound, with prices to reflect their goods (I paid £4 for a sourdough measuring 10cm x 10cm – I must have more money than sense). High quality produce is on sale from small producers for whom provenance is key, and you can taste samples. The open air Prosecco bar (read shack) was doing brisk business last time I was there. A good place to have a drink and a snack is Tapas Brindisa, but be prepared to stand.

Borough Market has changed recently. Many of the original traders have been ousted, as rents have soared, and this does leave a sour taste in the mouth.
After having a good look round, head to Southwark Cathedral, a little oasis on the banks of the Thames near London Bridge, where entrance is free.

You’ll probably be ready to head back to Waterloo now, via all those wonderful spots on the Embankment. Not familiar with them? Watch this space.