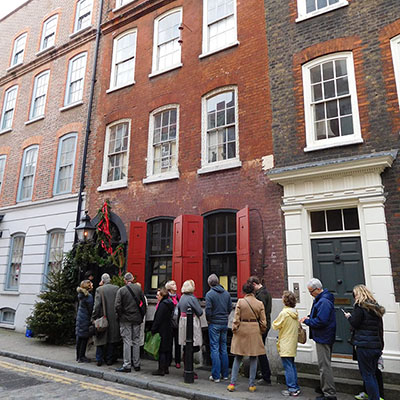 Tucked away in a quiet Georgian side street in Spitalfields, East London, is Dennis Severs House, one of London’s hidden secrets. I’d never heard of this place until it was talked about on the Robert Elms show on BBC London – neither had he, a seasoned Londoner, so it’s definitely beneath the radar. 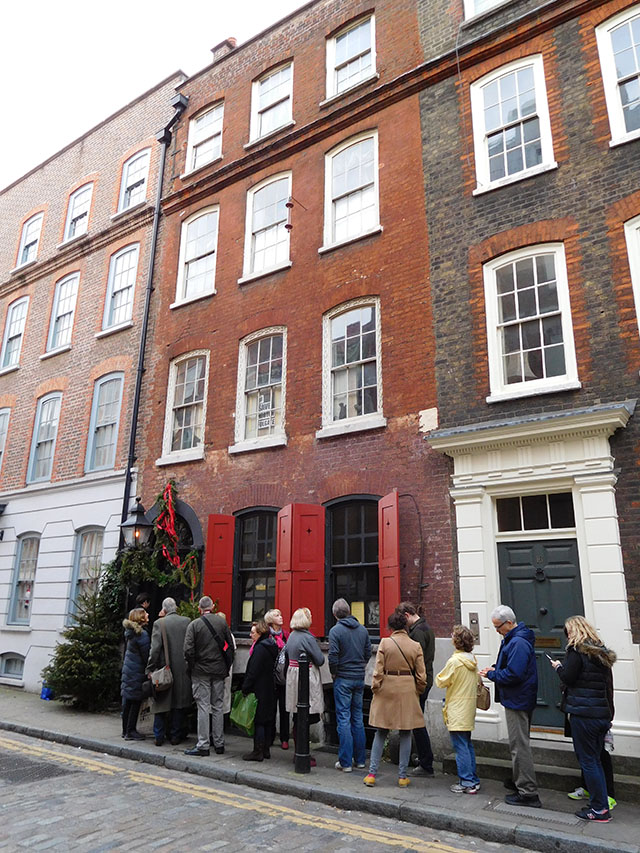 What makes the  house so interesting? Well, it’s not just a house. You might categorise it as a museum (but it’s more alive than that ) or an attraction (but it’s too eerie for that). I think the best way to describe it is as an experience.
We visited on a Sunday afternoon and were not able to book, so queued for half an hour or so. Don’t be put off, it’s worth the wait. Small groups of 10 or so are admitted in batches. After being told that photography is not allowed and that you must take the tour in complete silence, you are shown downstairs to start the tour. If you wear glasses, bring them! The house has no electricity and is lit by gas and candle light. However, my eyes never adjusted to the gloom. This is a good thing, though, as it adds to the atmosphere.
Artist Dennis Severs bought the house with the intention of preserving how the Huguenot weavers based in Spitalfields used to live in the eighteenth century. Not all the rooms depict that era; some of the contents date from the twentieth century – Dennis actually lived and worked in the house. When you visit, you’ll realise how difficult that would have been.
Although the contents of the house are a visual feast, the experience is multi-sensory; smells and sounds make you feel as if you have just missed the occupants who might have gone into another room. We visited in December, and the house was dressed for Christmas, which was an extra treat for us. Eight of us visited and we all thoroughly enjoyed – but I can see it wouldn’t be everybody’s cup of tea, you have to employ you senses and imagination so people of a more scientific bent may not enjoy it as much as those with a creative bent.
The house is open on Sunday from 12pm until 4pm and Monday lunchtime from 12pm until 2pm. Tickets are £10 (£5 concessions). You may have noticed that I haven’t put a link to the website – this is deliberate as I don’t want to spoil it for you! However, if you’d like to book an evening visit you will have to look at this page:
Dennis Severs House is at 18 Folgate Street, London E1 6BX. You can view a map of its location here: