Photographing the writers at Table 52 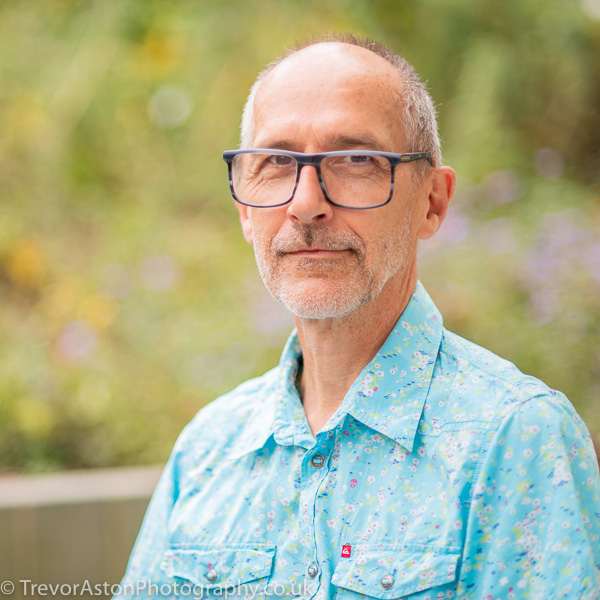 Once everyone was photographed I could join the others, thinking I’d got away with not having my picture taken. I was mistaken! My story is Reason to Live.

This month Teddington photographer Trevor Aston writes in a guest blog about a commission that combined two of his passions: photography and creative writing.

Photographing writers is a challenge. Generally speaking they do not seek attention. At least not for themselves, writing is inevitably a solitary, introverting activity. But for their writing they crave the attention of the world, to have it focus on their carefully crafted sentences. So while they might be the antithesis of the moth, fluttering away from the light, they won’t shy away if it helps attract readers to their words.

The writing group, to which I belong, is producing a collection of short stories called Stories from Table 52; to support it we need a website, and for that we need our pictures.

There’s no doubt that pictures of people increase engagement and raise response. Knowing what someone looks like makes it so much easier to connect. Giving the pictures a consistent style greatly improves the look of an ‘about us’ page so I chose to take the portrait photographs of our writing group around Richmond riverside.

The group met at Richmond and Hillcroft Adult Community College, and the riverside has a lot of elements to use for framing and composition; boats are a gift for photographers, curvaceous and colourful and the ground rises quickly from the towpath requiring flights of stone steps and soft grassy banks. The photographs will be different, but consistent in style.

We arranged a shoot for a weekday morning, I asked the group to arrive at ten minute intervals. The Tide Table Cafe by the bridge became the waiting area, outdoors of course, we were still under pandemic restrictions. It started as a photo shoot, but turned into a tea-party. We had not met up for months and we were frankly, a little giddy at seeing actual people, not images on Zoom. Mind you, I was missing out while I was taking the pictures. It probably made me hurry up, I wanted a coffee and a piece of cake too!

Trevor Aston is a writer and photographer. He is working in a cooperative producing a book of short stories. When the rules allow he photographs people for portraits and editorial use.

To see more of Trevor’s work, view his People and Editorial photography and follow him on Instagram.