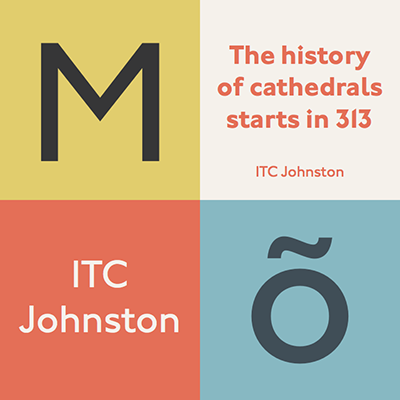 The London Transport Museum at the depot in Acton is not just for train geeks and has some treats in store for art and design enthusiasts. The Johnston tour is one of these.

Of the 5 different guided tours they offer,  I opted to do the Johnston tour. Johnston is the specially-designed typeface created to mark the 100th anniversary of London Transport. Tours are small (just 10 people on ours) and are led by volunteer expert guides.

Why a new typeface was commissioned

In 1915 there were so many posters at stations that station names were hardly visible. London Transport needed a style that would stand out from the surrounding graphic material and, amongst a sea of decorative typefaces, a simple sans serif would do just that. They commissioned Johnston and this was the beginning of LT’s branding – a word unknown at the time.

After a very brief history of the typeface in the lecture theatre, we moved into one of the archive rooms and were shown Johnston’s original sketches of both the typeface and the logo (called ‘bullseye’ at the time, becoming known as ‘roundel’ in the 70s). We then proceeded to the main depot to see examples on trains, buses and signs.

If you’re not a fan of fonts, the depot is still interesting to look round, with some great examples of trains and buses from all eras.

Johnston designed a compressed version of the typeface which was used on the buses, as well as the standard version. You can get more characters into a line with condensed or compressed type – but to me, a lot of the beauty has been lost here, plus some of the legibility. The early signage was all in capitals, but after a while people realised that upper and lower case letters (capitals and small letters) were easier to read, so these were introduced.

My favourite part of the tour was the Underground sign collection which had a selection of station, platform and miscellaneous signs and maps from all eras. Here they also have a cabinet containing a set of hot-metal fonts; I found out that the large capital letters were kept in the top drawer (or case) with the characters getting smaller as you go down – hence the terms ‘upper case’ and ‘lower case’.

I also really enjoyed having a brief look at the poster collection and will be going back sometime to take the Art and Poster tour.

If you are interested in taking the Johnston tour, tickets are £10 and you can get them here. If you would like to buy a commercial version, ITC Johnston, you can do so here.

If you would like to find out more about the Johnston typeface, this beautifully designed and highly illustrated excellent book, Johnston & Gill by Mark Ovenden, is well worth investing in.

A typical day for a graphic designer

What is a typical day for a graphic designer? I made a note of everything I did one Thursday last month; this is a record of my day.

How to mix and match fonts

Most designers choose to use two typefaces in their designs (font pairing). Discover tips on how to mix and match fonts, and see examples that pair well.

Pantone have announced that the Colour of the Year 2020 is Classic Blue, and Shutterstock’s forecast also features an intense indigo. What else is trending?

Why designers should be involved in decision-making

With their creativity, practicality and powerful problem-solving skills, designers should be involved in decision-making. Why is this so rare?

Why consistency in your branding is important

A local nursery has recently undergone a rebrand. Things started well where did they go wrong?